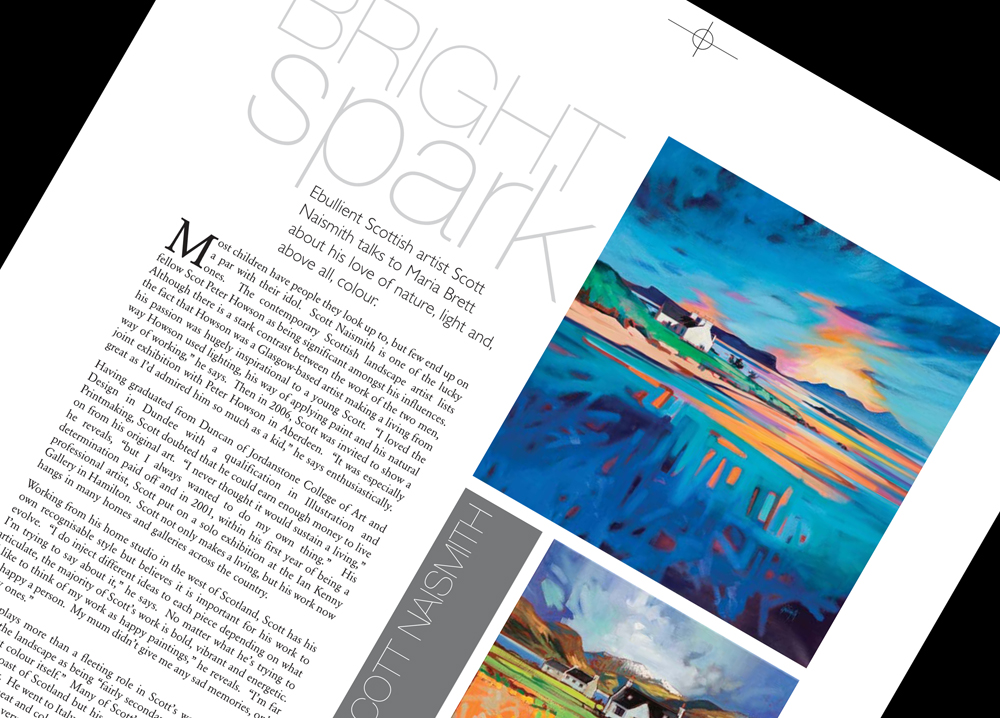 Back in 2008, This article was written in ‘Homes Plus’ magazine by Maria Brett: 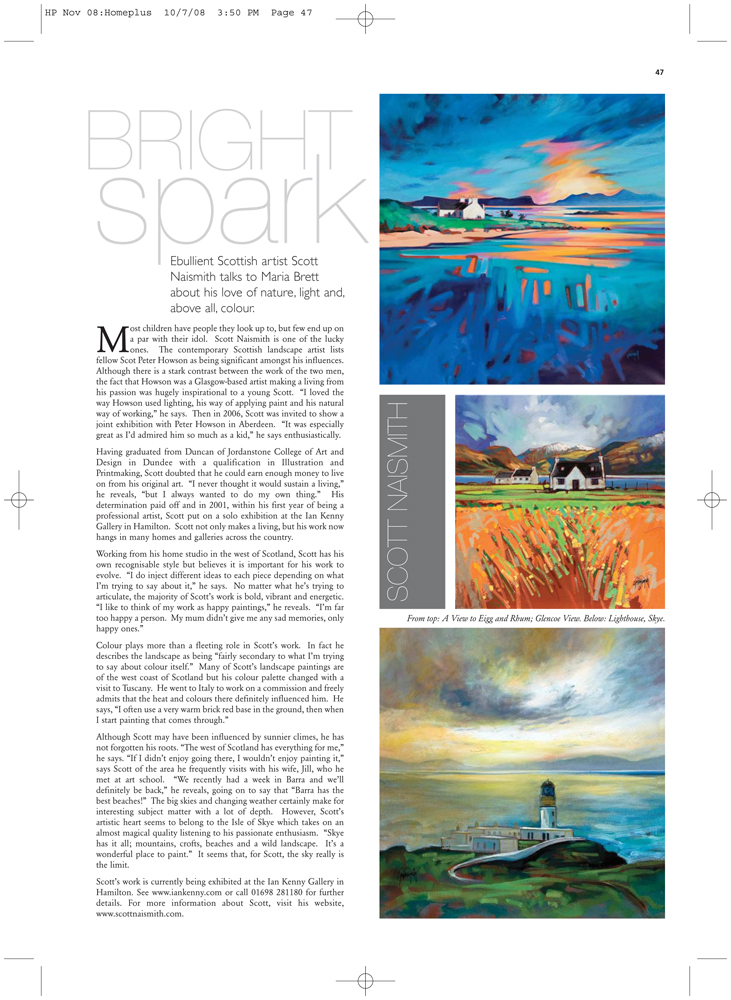 Scott Naismith in Homes |Plus Magazine 2008

Most children have people they look up to, but few end up on a par with their idol. Scott Naismith is one of the lucky ones. The contemporary Scottish landscape artist lists fellow Scot Peter Howson as being significant amongst his influences. Although there is a stark contrast between the work of the two men, the fact that Howson was a Glasgow-based artist making a living from his passion was hugely inspirational to a young Scott. “I loved the way Howson used lighting, his way of applying paint and his natural way of working,” he says. Then in 2006, Scott was invited to show a joint exhibition with Peter Howson in Aberdeen. “It was especially great as I’d admired him so much as a kid,” he says enthusiastically.
Having graduated from Duncan of Jordanstone College of Art and Design in Dundee with a qualification in Illustration and Printmaking, Scott doubted that he could earn enough money to live on from his original art. “I never thought it would sustain a living,” he reveals, “but I always wanted to do my own thing.” His determination paid off and in 2001, within his first year of being a professional artist, Scott put on a solo exhibition at the Ian Kenny Gallery in Hamilton. Scott not only makes a living, but his work now hangs in many homes and galleries across the country. Working from his home studio in the west of Scotland, Scott has his own recognisable style but believes it is important for his work to evolve. “I do inject different ideas to each piece depending on what I’m trying to say about it,” he says. No matter what he’s trying to articulate, the majority of Scott’s work is bold, vibrant and energetic. “I like to think of my work as happy paintings,” he reveals. “I’m far too happy a person. My mum didn’t give me any sad memories, only happy ones.”
Colour plays more than a fleeting role in Scott’s work. In fact he describes the landscape as being “fairly secondary to what I’m trying to say about colour itself.” Many of Scott’s landscape paintings are of the west coast of Scotland but his colour palette changed with a visit to Tuscany. He went to Italy to work on a commission and freely admits that the heat and colours there definitely influenced him. He says, “I often use a very warm brick red base in the ground, then when I start painting that comes through.”

Although Scott may have been influenced by sunnier climes, he has not forgotten his roots. “The west of Scotland has everything for me,” he says. “If I didn’t enjoy going there, I wouldn’t enjoy painting it,” says Scott of the area he frequently visits with his wife, Gill, who he met at art school. “We recently had a week in Barra and we’ll definitely be back,” he reveals, going on to say that “Barra has the best beaches!” The big skies and changing weather certainly make for interesting subject matter with a lot of depth. However, Scott’s artistic heart seems to belong to the Isle of Skye which takes on an almost magical quality listening to his passionate enthusiasm. “Skye has it all; mountains, crofts, beaches and a wild landscape. It’s a wonderful place to paint.” It seems that, for Scott, the sky really is the limit.

Scott’s work is currently being exhibited at the Ian Kenny Gallery in Hamilton. See www.iankenny.com or call 01698 281180 for further details. For more information about Scott, visit his website scottnaismith.com